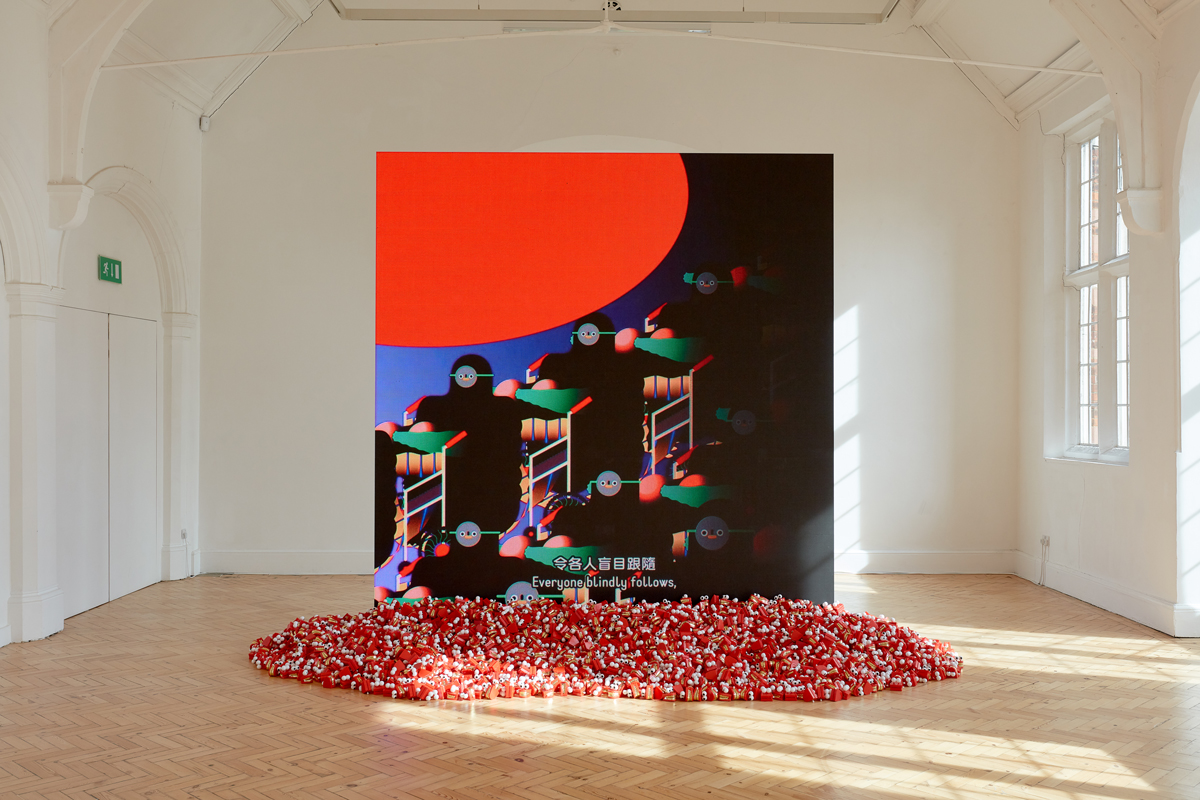 Future historians should study Wong Ping to understand what it’s like to be horny in 2019. This is no small matter. Our world is undergoing psychological climate change. Technology enables us access to heretofore untold pleasures: the ability to zap any desire (thirst, hunger, arousal, validation, affection, recognition, accomplishment); to feel intensely immediate, connected, jacked into any consciousness; to unlock a fugue state via the constant flow of stimuli; to be irradiated by desire in a sensory deprivation tank. All this saps our adrenal glands like casting a powerful spell depletes mana. It’s a mild form of ecstasy which acts as a prophylactic for the real. Things stay in the fantasy world.

Desire becomes the desire to desire, the desire to be desired takes hold of all other desires in a perpetual state of anticipation without climax. Moments of quiet or emptiness seem to stretch like a desert in front of us. Our evolutionary defense mechanisms cannot catch up, and neither can our philosophy or morality, those dead memes of yore. A new viral memeplex skullfucks our every sensory input.

Our world is full of an agonizing vibration, like a constant phantom notification at the edge of our consciousness. The old world is dying but we can’t see what’s being born. Or perhaps conception has not yet begun. We live in the nocturnal emission of a sleeping giant. The old emotional order slowly vaporizes, heating the atmosphere, enveloping the planet in a kind of psychological CO2. This is what I mean by horniness.

Yes, all that is solid melts into air, but now in the moisture of the internet this cools rapidly into the mists of orgone, the universal constant of horniness as described by the psychoanalyst Wilhelm Reich. “Reich, a Freudian Marxist, believed that a lack of good orgasms is what kept the working classes from realizing their political potential.”1 This horniness is the basic emotional unit of a new economy of connectivity, of electricity, of human plasma.

Like Marshall McLuhan, I wonder what would happen if art should be seen for what it truly is, “namely, exact information of how to rearrange one’s psyche in order to anticipate the next blow from our own extended faculties.”2 To that end, Wong Ping’s work makes me want to melt my face off with a blowtorch and attach it to the next stranger I encounter.

Wong Ping’s videos channel that ecstatic recognition popular online: “it me”. He takes us through an empathy olympics into the lives of sublimely amoral, solipsistic, horny beings. Various humanoids and animals dance through animated playgrounds lit by the kinds of colors only possible by dictating 1s and 0s via lightning bolts to a mirror of liquid crystal. We see his protagonists in private but universal moments: body horror in the bathroom; self-promo and plotting a hookup in the bedroom; debating taking action, fantasizing about its effects, and then ultimately doing nothing in the loneliness of a night bus. Each piece radiates intimacy, familiarity, and revulsion tempered by hilarity. It makes me realize how vulnerability is the currency of contemporary virtue.

Someone once said, “There is no more transcendence, only the tension of immanence.”3 Can we just say: fuck transcendence? Can we fuck transcendence? “Can’t you ever just fuck, and not think?”4 Even thought is a sexual strategy, of obscure origin. There really is no such thing as thought without sex. Thinking cannot resolve any tension; it is the supreme vibration of tension. Language forces us to open Schrödinger’s box on every feeling. When did you last let yourself surrender to an experience? Thought will be replaced by a better system.

My current project is to lay down a moral system to anticipate the development of a humanity ruled by telepathy. The work of Wong Ping is just one facet of my emotional strength training. I need to purify my information diet, to create, to unplug (with a wet pop!), to play my part in the cosmic game. There is too much ego in saying anything. I want to realize the Human Instrumentality Project. A single human consciousness will have its own signature feeling: a perpetual orgasm of absolute terror. For now, I feel nothing in particular, except intensity. The future isn’t here yet, and it’s giving me blue balls.

Moral: A society with telepathy will make no art.