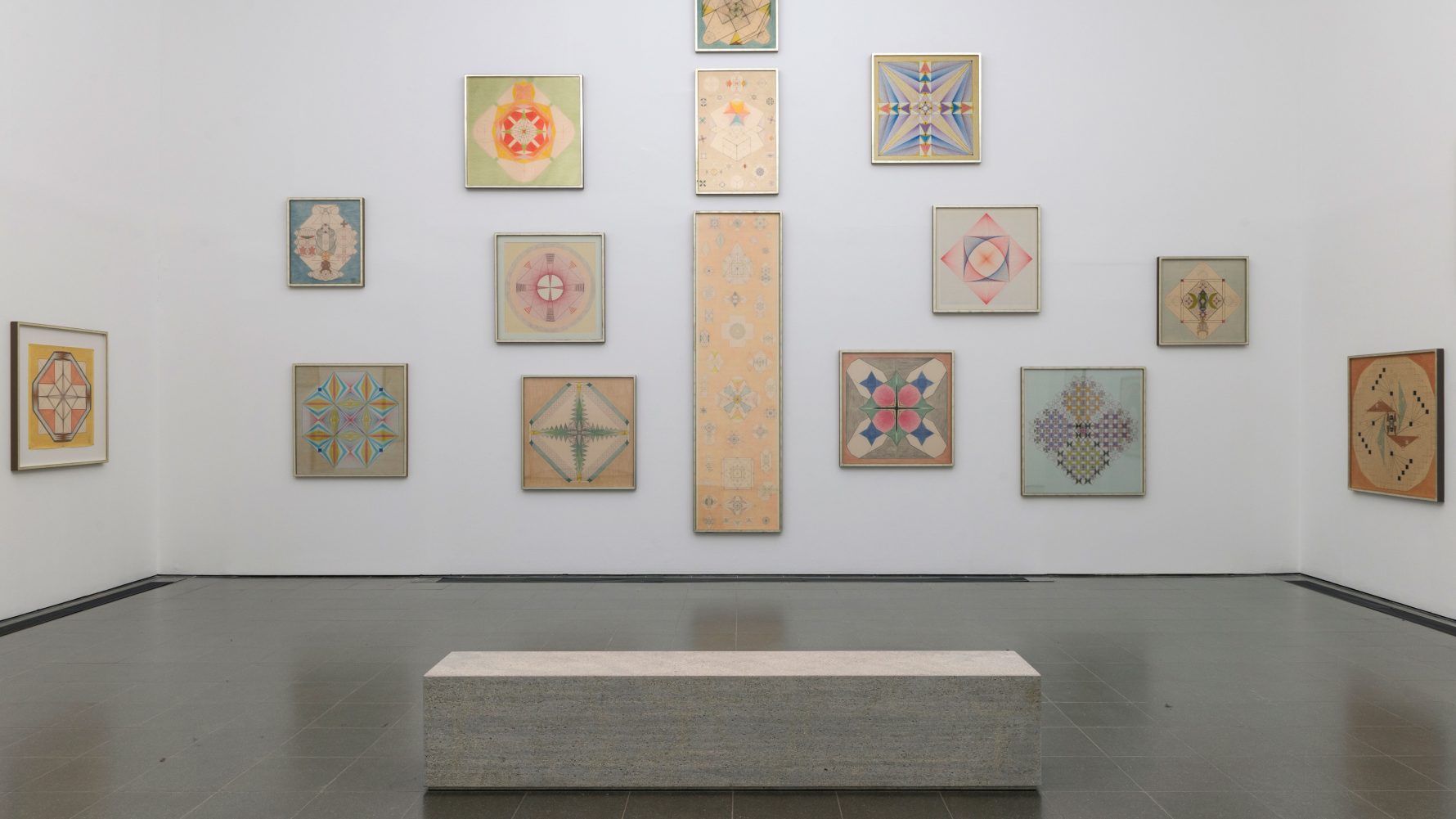 Halfway through the run of Emma Kunz at Serpentine Gallery, an unexplained fire broke out at Notre Dame. Twitter, humanity’s greatest attempt to date at reifying the collective unconscious, provided the best view into the events as they unfolded. Scattered anachronisms danced across the screen: frocked priests zipping around, priceless artifacts in undisclosed locations, the sung Latin of crowds, status updates for rose windows, armchair firefighting, the exhaustion of French facial muscles at the idea of forming an expression around another moment of “unity” after the latest trauma.

The bulging poetry of the moment spilled into the aftermath. “Electrical fires can’t burn 1,000-year-old oak planks” became the new “jet fuel can’t melt steel beams”. Another Houellebecq novel crept closer to reality. Foster + Partners proposed reworking the steeple into “a super-slender needle touching heaven’s clouds, a minaret, or a work of art composed entirely of light”, in what may just be described in a future history as the apotheosis of neoliberalism. Symbol? Omen? “First world problem”? Even those dismissing its significance agreed that, even so, its insignificance was significant.

Everyone felt the tug on a symbolic Jenga piece of Western civilization.

The near-shattering of the rose windows at Notre Dame made us feel the presence of those old masters. Looking at the drawings of Emma Kunz, you feel that, in another world, these would be schematics for stained glass works, a tribute to a loving God. In ours, they were just used as spiritual enemas. In a godless culture, this tinkering never transforms into something more sublime, but is just left as sketches in colored pencil. Instead, they’re the TV test patterns burned into your retina in the instant before you die; a final “Please Stand By” before either oblivion, or the simulation reloads. Or perhaps they are extraterrestrial quipu, dictations from yonder Arcturians, Andromedans, Lyrans or Pleidians, who can play our telluric currents like a harpsichord. Their same swirl of gem tones and pastels can be found everywhere from Fjällräven-Kånken to the Satchidananda Ashram–Yogaville in Virginia.

Kunz discovered the healing properties of what she dubbed AION A, a 20 million year old rock from a Roman quarry, made of “73% calcium carbonate as well as 27% silic acid in the form of quartz and other compounds (feldspar, mica), and clay minerals such as illite, montmorillonite etc”, deposited from glaciers carving up what is now Switzerland during the last ice age. In powder form, it may be mixed with water and applied to gauze wraps around any afflicted regions, or used as a mineral bath. Such a treatment cured Anton C. Meier, now of Emma Kunz Zentrum, of infantile paralysis. He now walks amongst us, chief evangelist of Emma Kunz and the £30 AION A powder.

This same rock is hewn into benches scattered throughout the exhibition by Cypriot artist Christodoulos Panayiotou. The whole setup looks like it was planned in 3D software before being dutifully squeezed into each room from a Platonically square tube. This all suggests some kind of conspiratorial pileup of Teutonisms in the precise angles of Bauhaus, Kunz and Mies van der Rohe, plus New-Age-replaces-the-Protestant-work-ethic. The centralizing spirit of Cthulhu behind every German product, from the Dark Ages to the European Union, wants to turn the spiritual into the transactional.

So goes the presentation of the actual works, caged as they were in glass and metal and looking ready for auction. You almost expect to find a price tag or contact number for enquires in the corner. This is despite the fact that, according to the curator, “Kunz primarily used the drawings for healing rituals, placing the drawings between her and the other person”:

Standing in front of the sheet of graph paper and concentrating on her question, she held her pendulum in her right hand above the paper. The movements of the pendulum indicated points, which she marked down; the drawing thus began with an array of pencilled dots. She then used the pendulum to establish the main lines and drew them directly on the paper, before starting to connect the dots with lines in pencil, coloured pencil and crayon.

Such a ritual was topically deployed to predict the outcome of a meeting in the early 1940s between FDR and Winston Churchill. On another occasion, “at the request of an advisor to the Principality of Liechtenstein, she attempted to ‘re-polarize the negative forces of Adolf Hitler’”. My mind is alive with the missed opportunities of an alternate curation divining the outcomes of Brexit, the gender of Meghan Markle’s baby (finally passing as he/him), or the place of Britain and Europe as they try to squeeze out competing dreams of independence between the blobbing of America and China.

Instead, Kunz has been abducted, Borg-like, into art history. The majority of her “biography” in the catalogue is taken up by the institutions and curators that have deemed her posthumously worthy of exhibition. The particular delights of her kookery have been ironed out and stamped with British credentialism. New Age sites flip the 80/20 ratio from her artistic practice to her mystic practice; both histories use the other to prop up their authenticity.

So I look again to her monads, her angels of Ezekiel of flaming wheels of eyes, the singularities of the Venn halves of her parallel afterlives. Only in both, she’s a hero of single women everywhere.